A woman friend who stays anonymous privately tweeted this discussion earlier. I believe anyone involved with Open Source communities should read and understand this. This is published with her consent.

People, and men in particular, let’s talk about how we deal with people from hate movements showing up in our repos.

OK so for everyone’s context, screencaps of a Gamergater commenting on a Node repo. We need to talk about this. 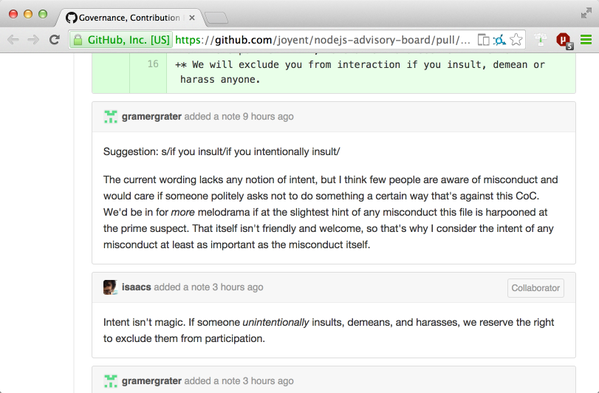 And to be clear, I’m not shaming @mikeal or @izs (you’re awesome). IMO there’s something broken in our response when male supremacists …

… show up, and men who clearly care about inclusiveness are getting this wrong. So I simply hope my tweets will add useful perspective.

So you might be surprised that to me it reads very different:

(1) male supremacist person shows up - clearly a safety issue
(2) people in the community are actually engaging with this person :(

Note the difference: As a man you might have read the arguments. I literally stopped at the usernames.

(Aside: If the “gr.amergr.ater” username somehow doesn’t spell “misogynistic hate mob” to you, please go read up on this.

This isn’t random internet drama; other people’s safety depends on you understanding this stuff.)

So why do you men get to care about the bigoted arguments and even engage & rebut? Because you’re unlikely to be targeted.

They read as “abhorrent” to you, but not as “threat to your safety”. Good for you!

But for me, the presence of this person is a problem.

When I see a male supremacist show up in an online space, the likelihood that I will participate drops to zero.

Because as much as I care about participating in you all’s projects, no open source project is worth compromising my safety over.

You can have a male supremacist in your online space. You can have me. But you can’t have both.

It’s probably not unreasonable to extrapolate that other women are similarly put off by the presence of male supremacists.

So when you decide to engage & rebut hateful arguments, this comes at the expense of excluding women and minorities from the online space.

I don’t have a clear answer. What I care most about is that community members are protected.

Here’s my suggestion #1: Don’t engage. It’s better to instantly block that person from the repo and delete their comments.

GitHub’s combination of “everyone can read”, “everyone can comment”, and “weak moderation features” can make it hard to ban effectively.

GitHub’s weaknesses make it not very safe for women and minorities, so if you want those voices heard, avoid the GitHub issue tracker.

I noticed that this gr.amergr.ate person had sent a small PR to a [my-project] plugin, and the plugin maintainer merged it.

This made me super uncomfortable, and I hope I don’t have to interact with that maintainer, because I really don’t trust their judgment.

When you get a PR from an author whose very name spells hate, then even if the diff looks reasonable, don’t merge it.

Reject it, or ignore it until becomes obsolete. Or even reimplement the fix yourself. Just don’t merge. Let’s not have hate in git log.