This story begins in 2007. I had to get a temp flat, for a week or two until the one I wanted to move into proper was available and I got the first thing I could. Sadly, no Wifi.

I tried to see what the neighbours were up to, but none were willing to share, so I looked around the ether for options. I found a Freifunk node. No password, free internet, at last. Just very slow.

The reason I couldn’t find a free wifi is simple: German law makes the owner of an access point liable for any legal fuss that’s caused over that connection. Allowing strangers to borrow your internet can turn into nasty legal shenanigans. Most Germans, myself included, secure their wifi with a password. Even cafés often limit access to paying guests.

I read up on Freifunk and thought I should give back to the community. I signed up to the mailing list and tried to figure things out. I couldn’t, people, technology, all hard to get into along with all the life-changes going on, so I shelved it. But I never forgot that I wanted to give back at some point.

The democratisation of networks is a rant I save for a later day, but I like the idea of people-owned networks, shared with everybody, no central authorities to fuck things up. Yay.

Now Freifunk statt Angst (a play on “Freiheit statt Angst”, a campaign against evaporation of citizen’s privacy) against the “Störerhaftung” (literally: “disturber liability”) law that makes most wifis in Germany password secured.

I simplify, the whole situation is more subtle, but suffice to say I think the law is stupid and many people agree. “Freifunk statt Angst”, run by the Freifunk community in Berlin, came up with a nice hack (I’m a sucker for nice hacks, if you don’t already know).

Through a random donation, the Berlin Freifunk community got a couple of hundred access points, for free, with the condition to hack the hell out of them. And they did, new firmware, sensible defaults to make the setup a matter of connecting power and an DHCP enabled Ethernet cable (things most everybody has at home, basically).

The kicker now is that a Swedish internet provider provides access to 100 anonymised VPN endpoints.

Everything put together is called a “Freifunk Freedom Fighter Box” and it looks like this: 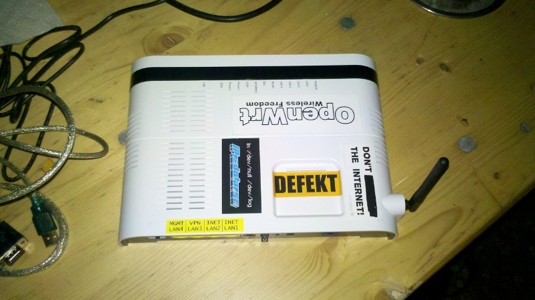 If you have an existing router at home, the setup takes a full 30 seconds and can be done by anyone.

Best of all, “Freifunk statt Angst” is giving away 100 of these boxes for free.

I picked mine up today after emailing with “Jürgen” after Thilo told me how easy it would be.

The setup was indeed a breeze and within a few minutes I had random people’s iPhones connecting. Yay!

I went out to see how far the wifi would reach and it isn’t bad but it could be better. Luckily modding the box with an external antenna is easy and I hope I can get this set up next week.