The Parable of Mustache.js

In October 2009 Defunkt released mustache.rb. It looked useful to me at the time, but I needed it in JavaScript. The code was just under 200 lines and simple enough that I thought I could port it over on a lazy Sunday, or Saturday, I forget.

So I did, and to this day, I believe my biggest contribution to mustache.js was not all the fancy stuff that happened since, but the initial transliteration of Ruby to JavaScript. Yes, transliteration, Ruby and JavaScript are close enough that I did a more or less line by line port of the original code. I can’t claim I did any programming myself there.

If you look at the early versions of both projects, they look remarkably similar 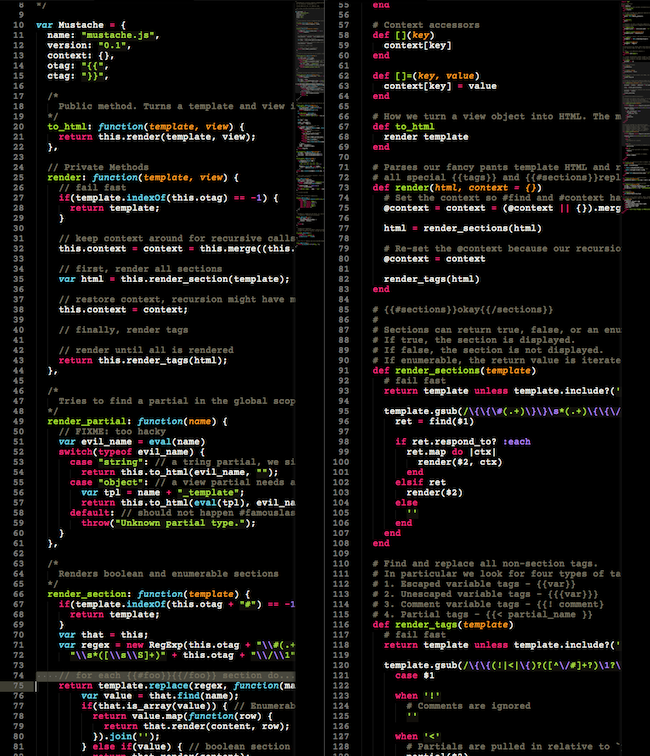 mustache.rb was a huge hit in Ruby land right away and soon after I did my port a number of very smart people came around and rewrote the existing RegEx based “parser” (eugh) into a proper parser and compiler combination to make sure all proper computer science theory is applied and things run most efficient.

I looked back at the code then and couldn’t find my way around, things were split over dozens of files and I am sure it all made sense to a very organised brain, but I couldn’t even begin to start to understand what the whole thing did. And I remember distinctly that I was happy that I found mustache.rb in the before state so that I had a chance to port it. I would never have begun to try if I had found the “more optimal” solution.

The realisation there though made me also a bit sad. I am all for doing the right thing and executing things faster and everything, but it bugged me that the clarity of the code was all gone now.

Then other smart people came and wanted to do the same for mustache.js and I was hesitant. But instead of trying to argue with clarity, because fuck that if we can make it 10x faster, my argument was that these parsers & compilers are way too long for a JavaScript implementation that was targeted at the browser. My tagline was “by the time your compiler is finally done downloading, my RegEx parser has already produced a result”. It was of course a bit of a cop-out, but I got quite far with it.

Until Nate showed up and wrote a parser/compiler in ~350 lines of code (that was roughly the acceptable limit for me then) and I finally lost that argument too. But it took a while until mustache.js finally got its well needed superpowers, with huge help from Michael.

Meanwhile, I met Yehuda Katz at a conference and someone introduced me as “Jan, he does CouchDB and mustache.js” and Yehuda just said “Oh boy, I’m going to upset you soon.” and then avoided me for the rest of the conference (or it was just coincidence, I don’t know :). A week later he released handlebars.js, a mustache.js-inspired templating engine with some extra features that were really useful. But it wasn’t according to spec, just close enough, that a lot of people started using it. I thought “good for them”, but I secretly (or not so secretly) wanted to steal the best ideas and get people to use mustache.js instead. That didn’t really go anywhere because people stopped working on the spec in a sensible manner and we couldn’t agree on more features. And eventually, I spent more time with CouchDB again.

In the meantime many more mustache implementations in other languages appeared and one implicit design goal between was it to allow sharing of templates between them and produce compatible output. There is even a spec.

Around the same time Twitter started using mustache.js in the frontend and it was a great honour. But they too preferred a proper parser/compiler implementation so @fat & team went ahead and wrote Hogan, a mustache.js-compatible implementation with a faster load and runtime. @fat talked about this at his 2012 JSConf US talk, he got asked why he didn’t submit a pull request to mustache.js instead of making a new project. He said that a Pull Request that consists of “Hey, I threw away all your code and replaced it with mine” isn’t such a good idea. I agree, it wouldn’t have left the best impression.

He praised though, that they were able to build a compatible implementation that could compete on its own merits while still being compatible with a spec and he said that all library development should be done that way. Too often we conflate a great idea with its implementation and we would be better of allowing different ones and let users pick and choose their poison.

Build libraries with a spec, encourage competing implementations. (We plan to do this for Hoodie)

The state of mustache today is alright, the implementations are all reasonably mature projects and people just use them. But there are a few that want to move it forward but are hindered by the complacency of the early adopters who have moved on to other things (including me). I hope we can get that resolved eventually.

On that note, mustache.js has a number of interesting Pull Requests and issues open and if anyone is interested in taking over maintainership, please make yourself heard in on the GitHub project.